is a complete real-time operating system. It covers all requirements from small microkernels to processors with several cores to distributed multiprocessor systems. By its modular structure, it is freely scalable.

RTOS-UH allows programs to react immediately and without delay to external events (interrupts). All management operations of the Operating systems are preemptively interruptible. Even problems with very high demands on reactivity can be reliably solved.

A number of programs (tasks) limited only by the size of the memory can be active at the same time. RTOS-UH distributes the available processor capacity to the individual tasks according to priority and optionally time slice, so that more important subtasks are automatically processed with priority.

With more than 30 years of field experience and well over 100 million operating hours, RTOS-UH is one of the most reliable real-time systems.

RTOS-UH integrates into any environment through extensive network support. On the WAN/LAN level TCP/IP is preferred, field buses such as InterBus-S, CAN, Profibus-DP, SINEC-H1, AB-Interchange etc. are supported.

With a PLC runtime environment and an IEC 61131-3 development interface, RTOS-UH combines outstanding real-time behavior with the manageability and well-known runtime behavior of PLCs.

Debugging such as tracing and breakpoints are integral components. The user interface provides full access to all system and user data. A graphical, window-oriented remote debugger gives access to even the smallest target systems.

RTOS-UH offers a fully modular design. Based on realtime kernel, which is identical in all RTOS-UH ports, the system can be controlled by adding individual components from the pure runtime system to a complete development system with editors, compilers, debuggers, etc..
The modular system design and the automatic integration of the independent individual Modules for a system (auto-configuration) also enable the system configuration of by the user.

RTOS-UH is a very compact operating system. The minimum requirement of an RTOS-UH system for ROM is less than 64 KB, for RAM less than 32 KB. RTOS-UH can also be used without mass storage, i.e. without hard disk or floppies. Small control or regulation applications can be realized compactly and inexpensively so also in larger numbers.

Target processors for RTOS-UH are NXP MC68xxx and PowerPC. Target systems are available in all performance classes, from the low-end 680xx series with 683xx controllers to the complete VMEbus spectrum and multiprocessor PPC workstations.

RTOS-UH provides complete control over multitasking. The user interface provides an overview of the current system status at any time.
With commands for direct viewing and influencing of task statuses, direct influencing of program statuses is possible.
The test phase, which is particularly difficult with real-time multitasking programs, is considerably simplified by line-tracing, even for high-level language programs and various debug tools. 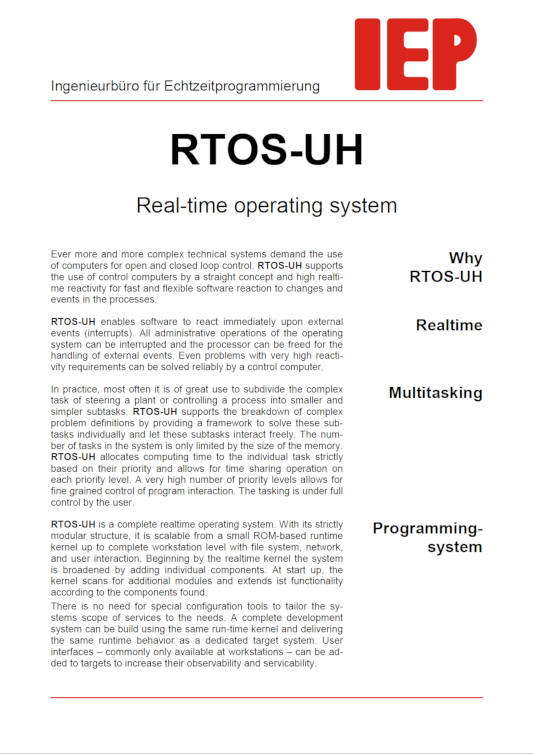 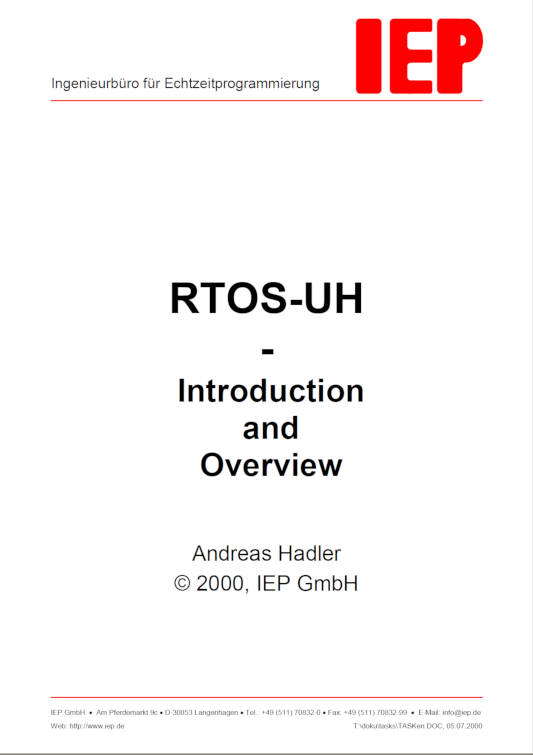